Ambassador Louie To Mingle With The Cool Kids Like many of you, I’d seen the announcement late last year from the BMW CCA Foundation about their next exhibit, “The Icon: 50 Years Of The 2002.” It said, “We’re looking to display around 25 of the best 2002s in the country. ‘The best’ can mean the most original, the rarest of the rarest, the fastest, or the most tastefully or unusually modified. Could your car be one of them?”

I saw that the application deadline was New Year’s Eve. But honestly, I regarded it with about as much attention as spam from a Nigerian prince. The idea that either of my 2002s— Kugel, my Chamonix ’72 tii, or Louie, my Agave ’72 tii—might be of the caliber the Foundation was looking for was ludicrous. Kugel is a nicely-modified driver, and Louie is a survivor with a great story, but certainly neither is one of “the best 2002s in the country.”

It’s hard to even say why I gave the issue a second look. My friend Brad Purvis sent me an e-mail in which he gently nudged me to think about sending in an application for Louie. “After all,” Brad said, “There aren’t many 2002s with books written about them.”

I mumbled something about my not wanting to be without Louie for the duration of an exhibit. I added something about, Louie’s being a fifteen-footer, and the car’s being shy because of its bad case of acne. Louie—whose full name is actually Louie Agave, named by my friend Scott Aaron and me because it sounds like a mobster you don’t want to mess with—has mojo, but the previous owner had sanded off the car’s rust blisters and touched them up with Hunter Green Rustoleum, making Louie look like an adolescent Martian. 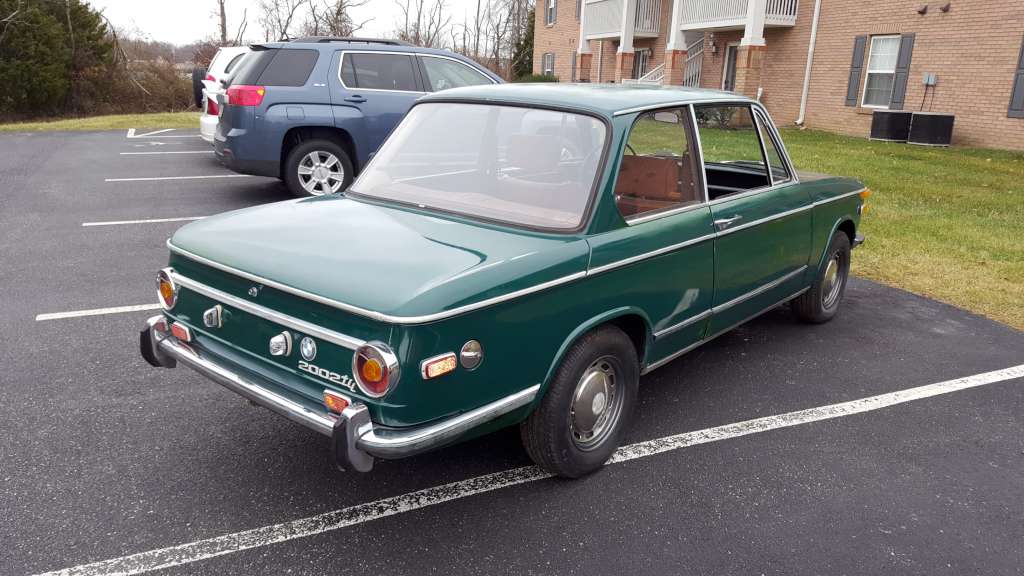 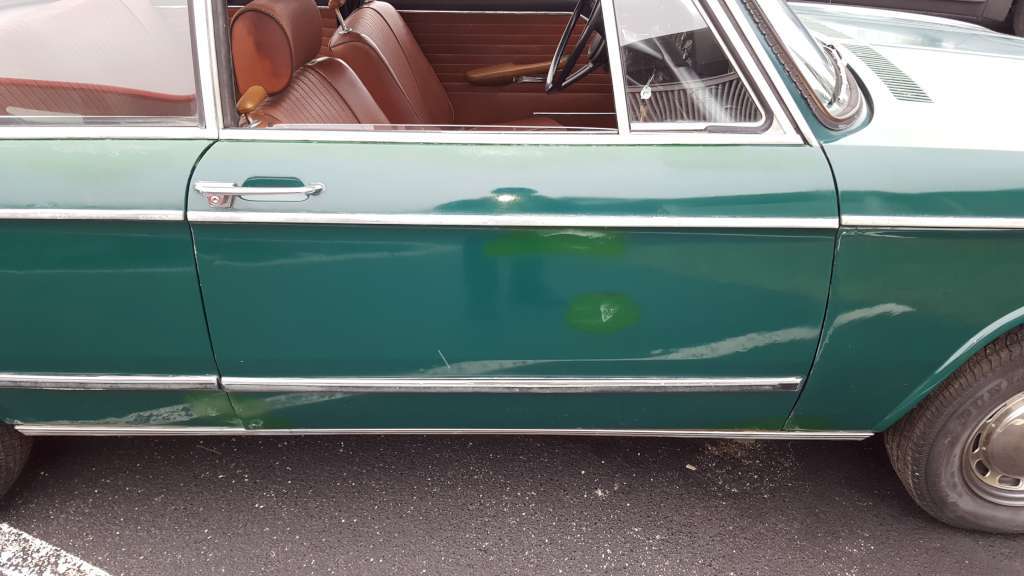 Plus, Louie has been sitting quietly in the safety of my garage, riding out the brutal Boston winter. To even think about getting him down to South Carolina seemed to be against the big scheme of things. To everything, there is a season—literally—and this ain’t it.

But Randy Greene’s unexpected passing clearly got me thinking about Louie. I wrote a piece a few weeks ago recalling how Randy had loaned me his dealer plate so that I could legally drive Louie the thousand miles back up to Boston if its resurrection proved successful (it did). At the end of the piece, I said, “I’m deeply saddened that Randy Greene did not survive 2017, that we only had that one face-to-face encounter, and that I never got to buy him dinner. But everything that is good and generous and trusting and pay-it-forward about this crazy hobby of ours was exemplified by him loaning me that plate, and I won’t forget it. Guess I owe someone a dinner in 2018. Or maybe someone will owe one to me. After all, it’s a brand-new year, and Louie and I have places to go.”

Perhaps that last statement set up a resonance in the 2002-related universe.

As December 31 ticked away, I began to see some posts on Facebook where friends back-and-forthed the question of who had sent the CCA Foundation an application for their 2002s. Maire Anne and I were leaving at about 6:00 p.m. to head over to a friend’s house for New Year’s Eve dinner. Right before we left, I thought, “Oh, what the hell,” followed the link in the Foundation’s e-mail, and pulled down the application.

It was pretty straightforward. The application had some very simple check boxes (“Original, restored, or modified?”) and a few open-ended questions (“What is the history of your 2002?” and “What makes your car interesting?”). I provided Louie’s short bio: that the car had been dead for a decade, virtually abandoned under a carport, that I spent a week in Louisville resurrecting it in place and then piloted it home a thousand miles, and that all of this was possible because of the kindness of strangers or near-strangers, all of whom were BMW CCA members. Sort of a Horatio Alger story: Bad car makes good. 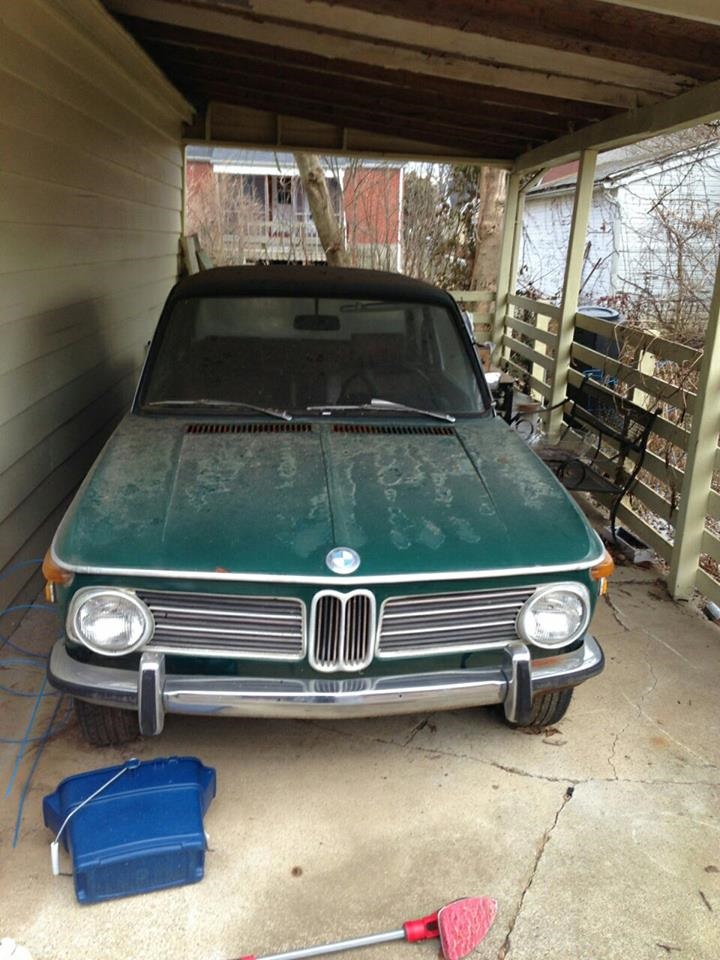 And then there was one interesting checkbox: “Will pay transportation costs to Greer, South Carolina yes/no.” Oh, right: There is expense associated with getting the car down there. Who bears it? There might be rare, gorgeous 02s for which the Foundation is willing to foot the transportation bill. Mine ain’t certainly among them. I checked “yes” and added a note that Louie isn’t a hangar queen, and that I’d probably just throw some tools and parts in the trunk, jump in, and drive it down. I attached the requisite two photos, one of which was Louie on the cover of my book Ran When Parked, hit send, and went out with Maire Anne for New Year’s Eve.

In the deep freeze that shortly followed, I promptly forgot all about the application. I was more worried about, you know, white walkers and armies of the dead. Until last Tuesday, when I received an e-mail from Bruce Hazard and the BMW CCA Foundation. “Dear Rob,” it said. “Thank you for submitting your car for consideration to the Exhibition Selection Committee for “The Icon: 50 Years Of The 2002.” The Committee and the BMW CCA Foundation are pleased to inform you that your 1972 2002tii has been conditionally accepted for inclusion in the exhibition. Congratulations!”

Of course, there is a catch. Well, two catches. The first is that the Foundation wants the cars there quite soon; although the exhibit doesn’t open until May 18, they want the down cars there between February 19 and March 2 so they can arrange the exhibit and photograph the cars for inclusion in the official exhibition book. I’m not crazy about the short time frame, but the symmetry in this affair is absolutely remarkable, as these dates align within a day of my original adventure with Louie last year: I began driving down to Louisville in a rented SUV filled with tools and spare parts on February 18, and drove Louie into my driveway on March 1.

The second catch is that the Foundation wants the cars in the exhibit for a long time, from May 18 through January 2019, although they are allowing the cars shore leave for the Vintage and Oktoberfest. One can request a three-month window, but it’s not like I live around the corner from the Foundation and can whisk the car in and out at my whim; Google Maps puts Greer at 934 miles from Newton, clearly a two-day trip. Taking into account the early arrival, that means being without the car for ten months.

Still, it may be best to put Louie down there for the duration. It allows him to tell his story while freeing up a garage space at the Hack Mechanic stables. Plus, after all, not only do have other vintage BMWs, I have another ’72 2002tii (Kugel). As I say over and over, this ain’t hardship.

But part of what sealed the deal was when I asked if Louie could be parked next to Yale Rachlin’s white 2002tii, which is part of the Foundation’s permanent collection. Bruce Hazard’s response: “There are three basic parts to the exhibit: The birth and evolution of the model, how the owners modified and updated their 02, and how it inspired the formation of the club. We are going to use Louie along with Yale Rachlin’s 02 to highlight the link to the club. The fact that Louie is a survivor is just right for this role.” So: Ambassador Louie!

Obviously, the next step is getting Louie down there.

I wouldn’t know who I am, or who Louie is, if I didn’t drive him rather than ship him, but it is winter, and it’s been a very active winter at that. I’ll likely watch the weather like a hawk, and when there have been two good rainstorms to get the salt off the roads, and two days of clear weather forecast, I’ll make a run for it. This will be another bit of symmetry with last year, when one of the enabling factors of the Louie trip was my friend Scott Aaron innocently posting on Facebook, “Looks like winter has just been cancelled.” Sure enough, there was a ten-day forecast of unseasonably warm weather from Louisville up to Boston. Two days later, I was on my way.

One odd thought, though, does trouble me: I’m thinking of the movie Carrie, where Sissy Spacek, the weird kid, is tricked into going to the prom, voted prom queen, accepts the crown, and it’s all beautiful until pig’s blood is dumped on her; then she unleashes her telekinetic powers, and, well, it’s not pretty. I can’t help but remember that Louie sat alone and unloved in a carport in Louisville for ten years, and that experience surely left its physical and emotional scars. He’s got abandonment issues. The acne is clearly the physical scars. I need to—tactfully and professionally, of course—tell the BMW CCA Foundation that if they’re planning on pulling a Carrie and inducting Louie only to surround him with cool, pretty, high-dollar 2002s that travel in the right circles and know the right people, and embarrass him and make him feel unworthy, Louie is indeed capable of pulling a Carrie as well. Louie Agave, Ambassador Of Terror!

I do wonder if folks at the CCA Foundation looked at my application and said, “Siegel is expecting us to accept that?! Wait; Collector X wants us to pony up three grand to trailer tii with VIN 2760001… this one’s free… it does have kind of a cool story… I know! Let’s set up a pool to see how far he makes it—IN FEBRUARY!”

But seriously, everyone knows that the great side-benefit of this is that I get to look on Craigslist in South Carolina for something interesting to drive back.